We have this website to benefit you, the theWord user. All of our efforts here are free, to be a blessing to you. If you get a blessing from our modules, then please on your birthday once a year, send us a small gift of $10 via paypal. You can also send me a check (email me at [email protected] for info).

There are various reasons why this happens, so we need to go through all the factors that bear on this one by one.

As an alternative, click in the BibleView window, and then CTRL+O or in the menu, click on the “Tools” icon, and the first option should be “Bible Window Options… Ctrl+O”.

There go to Strongs Numbers in the left-hand side, and then click on “Show Strong’s Numbers”. You should be seeing something like this… 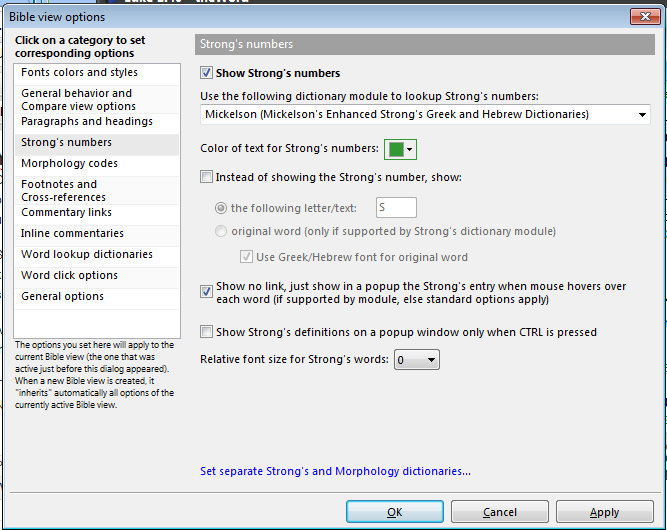 You don’t have a Strong’s Dictionary installed.

In the above image, note that first drop down box has the currently installed dictionaries which are Strongs dictionaries with the numbers and set up correctly. If you have this field blank, you don’t have a Strong’s dictionary that TW is able to identify as such. Reinstall theWord from the official website and this should fix the problem. In the installer, it will present you with what modules and files you want to install, and just choose the Strong’s dictionary.

The Popup eventually shows up, but only after a long wait.

Click in the BibleView window, and press Ctrl+O to get to the Bible options dialog. Now click on the bottom-most option. 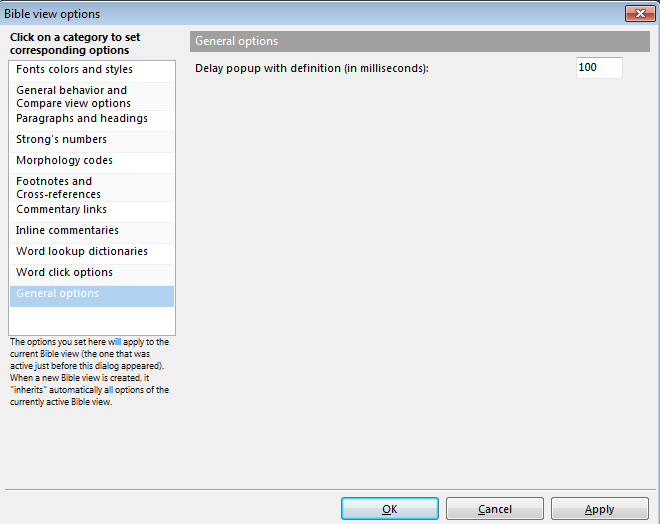 In the bottom option in the left-hand side is General Options. Click on that, and then see the delay for the popup window in milliseconds. 100 milliseconds is 1 second.

There is a possibility that the Bible that you are using doesn’t have Strong’s numbers. This is a nasty problem because it is not very easily detected. First of all, right click on the Bible version in the Bible selector bar, and then “Info…”. At this point, you will see the information that the Bible Module Creator has put in the module. At the bottom of that screen is the actual Windows filename for the file, and its path. Go there in Windows Notepad, and load the file (its ASCII and should load fine in Windows Notepad), and see what it looks like in Notepad. If you see [WGXXX] or [WHXXX] then it is a Strong’s Bible, otherwise, it is not. This is what a sample raw Bible text with Strong’s numbers looks like in Windows Notepad… 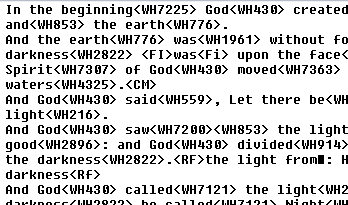 Notice that the Strongs numbers look like <WHXXX> for Hebrew, and <WGXXX> for Greek.

If your Bible version doesn’t look something like this, then it doesn’t have Strong’s numbers.

These are the solutions to this problem. If none of this solves your problem, then please write to me, and I will try to find another solution for you.