Webmaster: davidcoxmex.com I recommend that you download theWord.com from their website theWord.net Also visit our specialized sites for theWord dictionaries and theWord commentaries. We offer a large number of zipped tw modules here (for free).

We have this website to benefit you, the theWord user. All of our efforts here are free, to be a blessing to you. If you get a blessing from our modules, then please on your birthday once a year, send us a small gift of $10 via paypal. You can also send me a check (email me at [email protected] for info).

Class Objective: This class explains the TheWord options for using the program when you have eyesight problems.

Many legally blind people who can still see some are using computers as they can to study the Bible. TheWord has a few options that make using it easier for these people.
___________

First of all, some of these types of people have talked to me, and there are system level helps that are applicable to all programs. I am no expert on these, but you should investigate them first before changing one program and fighting with all the rest on your computer.

I would recount an experience I had with one such user. He had a regular desktop computer, but purchased a large screen TV, and connected the computer output to his TV. The end result was a screen that was about 3 feet across that he could easily read. I would also recommend that you consider purchasing a small video projector, and rearranging your work area so that you have a desk about 5-6 feet from a blank wall, and setting up the video projector so it projects on the wall. We do this in our small church for congregational singing, and I have used the same setup when presenting TheWord instructional conferences. Using an Epson video projector, you just connect a regular USB cable to the projector, and the projector downloads the necessary driver files to your computer on the fly and in a minute or two you are seeing your screen on the wall. It would seem to me that this is the best setup for those with eye sight problems (which is where I am headed).

To permanently enlarge the text size of a Bible, TheWord again shines wonderfully. Go to the Main Menu -> File -> Preferences. There select the tab at the top that says 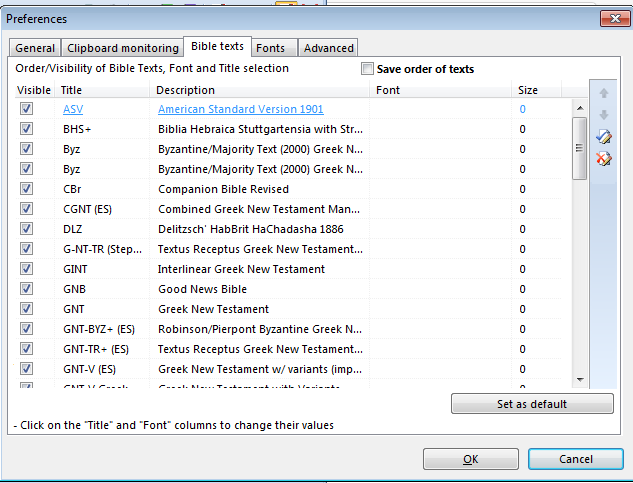 In this window, you can individually set the font size for each Bible version you have installed as well as set the default Bible version.